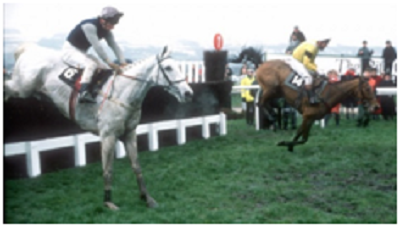 A flash of grey and this dappled beauty could turn many heads. Some backed him purely for his different colour, the mottled grey in a sea of brown. Desert Orchid never worried about Sweet Itch he just worried about winning and he won plenty. If he had needed to be concerned, then a visit to https://www.stinky-stuff.co.uk/sweet-itch/ would have helped keep it at bay.

His career in racing did not start well. He fell so badly at a novice chase at Kempton that they feared the worst. In true “Dessie” fashion he got up and rode on. Mistake s were to blight his early career, he pulled up at Cheltenham made a bad mistake cost him the race at Ascot. Again, he recovered and came back to beat a stellar field to win the King George VI chase when he was a rank outside by the bookies due to his speed and this was endurance. He was being groomed for the Cheltenham Gold Cup. This was a 3-mile race, but Dessie was better over 2. With careful training and planning they prepare him for the step up of the Cheltenham Gold Cup.

Few fancied his chances. On the day the weather was raining and the going soft. Poor weather had struck the course that year and conditions were like a bog. Dessie hated these conditions as they were total against his style. What happened has now passed into legend and still features as one of the best races ever staged, Despite being behind a horse that loved the muddy conditions somehow Dessie” showed his true potential and reeled in the horse and won the gold cup. When he came into the winner’s enclosure he was hailed an absolute star.

He went on to win many other races throughout Britain, but he was never entered for the Grand National to see if he could repeat Golden Miller’s feat of winning both. There were two reasons. Firstly, he did not do well with left hand courses, only Cheltenham, which was a left hander had given him any success. He struggled with all left-hand courses making his jumping strangely ragged. The second was that the owners were to scared of him getting hurt in what is the most difficult horse race in the world.

He retired and began a series of social engagements and appearances. Because of his colour he was well known, and his temperament seemed to suit the occasion, Dessie even playing up to the crowd. He raised over forty thousand pounds for charity. He appeared at the start to lead the racers out at Kempton where he had run so many times. At his 27 birthday he was parade around the stables, but he was becoming to old to be ridden and too old for appearances. This grand old runner died in 2006. A grave was erected at Kempton where he had won so much, the King George Medal was ended, and the Desert Orchid chase replaced it.